I can’t get enough of it. But Korean history is basically Game of Thrones in Asia.

How much Korean history do you know?

Why would most people even bother?

That’s the last time you will ask yourself that question. I’ll be honest. I fell into studying Korean history to fulfill a credit I needed for graduation. It hooked me immediately, and I exhausted the university’s Korean history offerings. My fandom of Korean history was one of the main draws bringing me here in 2004. Yet when I went to these historical sites, they didn’t give much information. They’d give you info that was technically correct but totally uninteresting, like how tall and wide a building was and how many columns. Or that a place used to be in a neighborhood that doesn’t exist anymore and no one cares about anymore. It was from this frustration that I worked with historians to create The Dark Side of Seoul Tour. It took a year of research and the use of many old maps to pinpoint the locations of a lot of these events before we started. And we continue to develop and enhance this tour. Here are a few stories we have dug up.

The Alley of Ashes

In the 1500s there was a 12-year-old king on the throne, King Tanjong. Unfortunately he had a very ambitious uncle, Prince Suyang. One evening, Suyang and his men camped out in some alleys near what is now Anguk Station. As Tanjong and his entourage passed by, Suyang’s men ambushed them.

They killed so many people that no one could count all the bodies.The stench from the rotting bodies was so bad they ended up just burning the area to the ground to get rid of the smell and to purify the land. After that, people called the alleys Jaegol, “the Alley of Ashes.” And today it’s officially called Jae-dong, “the Neighborhood of Ashes.”

Riots marked the waning years of the long lasting Joseon Dynasty. One such riot was the Gapshin Revolt of the 1880s. A pro-Japanese faction led it, determined to overthrow the monarchy and modernize Korea, similar to the Meiji Restoration in Japan.

Queen Min got wind of this before it happened and was able to procure Chinese troops just in time. After three days of fighting, where rioters invaded aristocrats’ homes and slaughtered their families, the soldiers suppressed the revolt.

A year after that, the first westerners were allowed inside The Hermit Kingdom. The first batch was a bunch of diplomats and missionaries. They introduced themselves to King Kojong, and he was like, “Nice to meet you, but please be patient as we find you some housing.”

Considering all the newly empty households as a result the Gapshin Revolt slaughter, some of the king’s advisers suggested he give the houses to the western barbarians. The king was appalled, thinking that his guests would be offended by the ghosts.

This was actually in one of the missionary’s journals. When the westerners found out how cheap the houses in that area were going for, they said it was no problem. They took them.

One such house, located around where the Constitutional Court now stands, was owned by a Korean general. He and his family were killed in the Gapshin Revolt. It was taken over by an American missionary doctor named Horace N. Allen, where he converted it into Korea’s first hospital. This later became Severance Hospital, which we still have today. He wrote in his journals how he had to scrub down some rooms because of all the blood and gore.

The Constitutional Court currently sits on the original site. That figures into modern history in that President Park Geun-hye was impeached there in 2017. We decided to cancel our tour that evening because a couple of protesters were killed right near our meeting spot, near the Constitutional Court. There was an unusual circumstance for secession in the mid-1800s. The king didn’t have any legitimate sons to take over after he died. To remedy this, he adopted a boy from a related family. Before the boy came of age, the king died. The boy’s father, known as the Heungseon Daewongun, took over as regent and ruled Korea from around the 1860s to 1870s. He was also one of the greater assholes of the late Joseon Dynasty.

The Daewongun closed off Korea from the outside world and didn’t let it modernize. He wanted to turn Korea back toward an earlier period to make Korea great again (sound familiar to anyone?). His immigration policy basically was, if you see a foreigner on a beach, kill him on site.

He felt most alarmed by this new foreign menace called Christianity. A perverse philosophy in his opinion. For example, in Judeo-Christianity, the fourth commandment was to honor one’s father and mother.

Why wasn’t it the first? (See, Confucian society.)

So in the 1860s, he rounded up by from some accounts were 3,000 Catholics, put them up on a hill on the north side of the Han River, and decapitated them all. These were the Byeonin Persecutions of 1866. So many heads rolled that some said the Han River started turning red. And after this massacre, the hill was dubbed Jeoldusan, or “Beheading Mountain.”

Today, that’s where the foreigner cemetery is. If you go there, which is near Hapjeong Station, you can see shrines and tributes to these martyrs, including the chopping block used for the executions with the blood stains still on it.

In the 1700s, the king had a problem with his son, Prince Sado. Sado had a habit of raping and murdering the palace servants. But since he was of royal blood, the king couldn’t execute him like a common criminal. So his father gave him two choices, do the honorable thing and commit suicide or take what’s behind door number two. He chose the latter, where his father locked him inside a rice box on the grounds of Changgyeonggung Palace. He died from starvation after eight days.

Sado’s son ended up becoming King Jeongjo, who’s considered one of the greatest kings in Korean history. Did lots of great things for the people and also built Hwaseong Fortress in Suwon. In fact, if you visit Hwaseong, there are replicas of the rice box his father died in so you can take a picture of yourself in it. Sweet, huh?

There’s another camp of historians that claim that Sado wasn’t crazy at all. His father was–crazy enough to lock his son in a rice box. But it’s the winners who write the history. 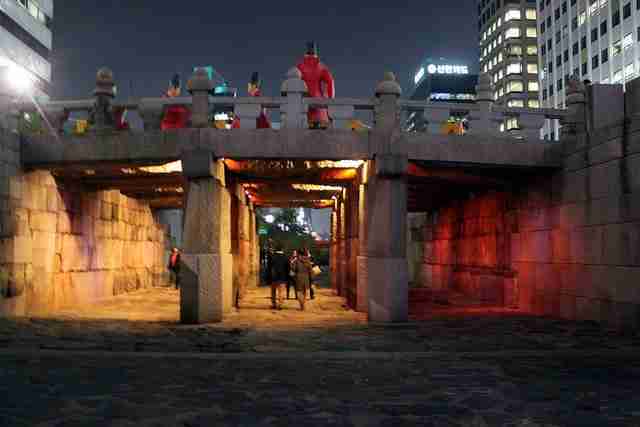 Time for a little love story. It’s between the founder of the Joseon Dynasty, Yi Seong-gye, and his second queen, Sindeok. Back then, the king had two queens, a queen from Jeonju–the Jeonju Queen–and a queen from Seoul–the Seoul Queen. Sindeok was the Seoul Queen. She and the king were very much in love. Who didn’t like her so much were the sons from the Jeonju queen, mostly because Sindeok kept promoting her sons to be ahead of them to be in line for the throne.

Unfortunately Queen Sindeok became ill and died. The king was so brokenhearted that he made the unusual step of building an elaborate tomb for her on palace grounds, around where the British embassy now stands. As the king was in mourning, his prime minister supposedly hatched a plot with Sindeok’s sons to kill the sons from the Jeonju queen. The fifth son from the Jeonju queen heard about this and convinced his brothers to do a pre-emptive strike. They killed Sindeok’s sons.

The king was so horrified that he abdicated the throne and gave it to the oldest heir from the Jeonju queen. The fifth son, who was the ambitious and crafty one, somehow convinced his older brother to let him have the throne. He later banished him.

During his reign, a flood hit Seoul, washing out a bridge on the Cheonggyecheon Stream.

This man hated Queen Sindeok so much that he dismantled her tomb and used the stones, some of them upside-down, to rebuild it so that people would always walk on top of her grave.

It still stands there today, and tourists, lovers, and families walk over it without knowing its morbid history. There are, in fact, two unread plaques there detailing the story I just told, but Sindeok is demoted to concubine.

These are but a few stories embedded in the dark recesses of Korean history. There are great accomplishments, particularly those involving King Sejong and Admiral Yi Yung-shin. But every country has its dark moments.

If you want to hear more of this history, sign up for The Dark Side of Seoul Tour. It runs five days a week. We have a regular version and, for the hardcore, an extended version.

DISCLAIMER: I have a feeling some of the more academically inclined who live only to correct others will start a comment with, “Well, actually..” Before you bother, keep in mind that there are some embellishments here for dramatic effect, but the basic facts are still there.