The Short and Blunt Guide to Seoul’s Palaces

Palaces are one of the top things to do in Seoul. If you’re coming to Seoul for a short time just go to one palace.

From my own experience and from talking to guests on our tours, once you’ve seen one Seoul palace, you’ve seen them all. But you should AT LEAST see one.

The only exception is if you’re really into Korea’s palaces or if you are killing time.

I know that tourism, historical, and nationalist partisans will chastise me. But this guide is for you. Not for them. Actual tourists have given me their opinions.

Seoul has a total of five major palaces. Seoul has rebuilt/restored them in recent times. Seoul’s history obliterated things. Fires. Invasions. More fires. Uprisings. Colonial occupation. Did I mention fires? Civil war. Modernization. If you want to see great royal structures that never were rebuilt, head to Gyeongju, where you can look at a giant field and imagine what used to be there.

When the Japanese took over, they did a lot of symbolically nasty things. They constructed a road between an ancestral shrine and one of the palaces to cut the royal family off from their ancestors. They erected the governor general’s office in the middle of the main palace while also moving the gate a few meters to the east to kill the feng shui. They established a zoo and a greenhouse in one. Supposedly that sullied the palace. Some of these structures still exist. A lot of the palatial restoration efforts since the 1990s have attempted to undo what the Japanese undid.

If you get the right tour guide, you can learn a lot. But the written info the government puts out is extremely frustrating. Expect to see a lot of “UNESCO World Heritage Site #24601” and plaques detailing how many meters wide and tall structures are. All this information is technically correct–AND EXTREMELY DULL!

Admission to the palaces go from cheap to free.

If you wear a hanbok (traditional costume) you can enter for free. Rental places are all over. It’s up to you if you want to spend W15,000 to save on a W3,000 ticket. I do see some cool hanbok out there these days. Gyeongbokgung: The Big One

This is the main palace and the largest one.

According to local historians, if you look closely at some parts of the eastern wall, you can find bullet marks from the Korean War. If the Seoul government finds out, I’d bet they’d remove them. 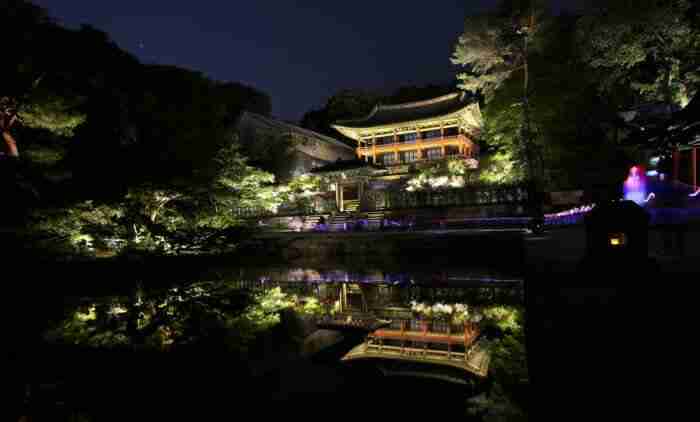 Changdeokgung: The Pretty One

For most, it’s a toss-up between this one and The Big One. It has the famous Secret Garden. You have to register to get a tour of it. But hey, even when it was an active palace, most officials couldn’t venture inside the garden without the king’s permission. If you truly want to explore the palace on your own, pay a little extra for admission between April and October.

I do like how the buildings integrate with the landscape. To me, that’s how Korean traditional philosophy differentiates itself from traditional Japanese concepts. Japanese arts control nature to reach some imagined ideal: Zen gardens, bonsai trees. Korean aesthetic adapts to nature. A typical Korean bench looks like the tree it came from. A Korean garden is basically “plant it and forget it.”

The Moonlight Tour. Yes, you can register to see the gardens at night. Tickets go fast. More info here. 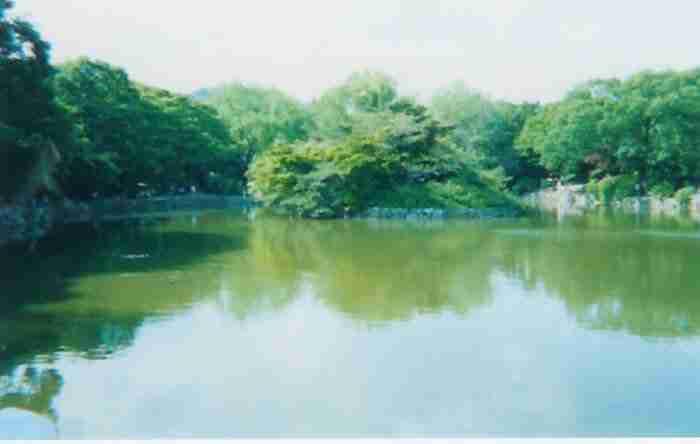 Changgyeonggung: The Quirky One

I have a special place in my heart for Changgyeonggung. Besides being the palace with the most egregious use of the letter G in its Romanization, it has some quirky charms. For one thing, it’s greener. There’s more grass and less gravel. It’s relaxing. It’s not as crowded. It was the first palace I ever visited.

This is one of the palaces the Japanese tried to sully by installing a zoo, botanical gardens, and a greenhouse. The zoo is gone–well, it moved to Seoul Grand Park. The greenhouse still remains. It’s a conglomeration of Korean and Japanese gardens.

Prince Sado’s father locked him in a rice chest in the palace, where he died after eight days from starvation. The queen kept it a secret until the king died.

Another story takes place near Tongmyeongjeon, the queen’s quarters. One of King Sukjeong’s concubines, Jeong Ok-jeong/Jang Hui-bin, who got promoted and demoted as Queen Inhyeon was banished and then returned, supposedly cursed the queen by burying a doll bearing her likeness with dead animals. The queen soon died of disease. She, family members, and other assumed co-conspirators were forced to drink poison.

This was part of the palace but a Japanese-built road bisected it. The buildings are mostly closed to the public except on the first Sunday in May, which is a ceremony honoring the royal heritage. The grounds around the shrine are worth it if you want to stroll in a nice wooded park in the middle of the city. If time crunches, you can skip it. Deoksugung: The Modern One

After Empress Myeongseong’s assassination in 1895, King Gojong moved here. This is where the Joseon Dynasty and the Great Daehan Empire lived its final days. The area surrounding it, Jeong-dong, was one of the first areas westerners settled in Seoul in the late 1800s. You can see the architecture looks more like Colonial Virginia than Joseon-era Korea.

The buildings here are more western, as Gojong was trying frantically to make Korea look like a modern state to give it respect and to stave off Japanese overtures to take it over. Five hundred years–one of the world’s longest lived dynasties–ended here.

Secrets of the palace

Foreign embassies occupied much of the original palace land. It used to reach all the way to Gyeonghuigung Palace. The area around the palace has a lot of little tales. Gyeonghuigung Palace: The Forgotten One

You could also call it “The Cursed One.” It’s the most haunted palace in Korea. Built by a mad king. Violates the rules for where to align everything. Built in front of a cursed rock with the mountain backdrop being the same mountain that’s the center of Korean shamanism.

In reality, the Japanese pretty much demolished it and used it as a school ground. It was then the location of a Seoul school. The original gate moved to the Chinese Embassy and now sits at the Shilla Hotel. Another of the royal buildings resides at Dongguk University. When you look at a tourist map of Seoul, you’ll see pictures illustrating the location of the other four palaces. Gyeonghuigung is a red dot.

The Lowdown and a Secret

Really, many Seoulites forget this palace even exists. The only reason you’d go there is if you’re also visiting the Seoul Museum of History, which is an amazing museum in my opinion. Great if you’re a fan of SimCity and how cities develop.

Between the palace and the museum, next to the parking lot, is an indistinct concrete structure that looks like it’s jutting into the mountain. That’s actually a Japanese bunker from World War II. There is nothing there to signify it, and today it’s basically a storage shed.

The only big event that has happened here and may happen regularly is the recreation of the national civil service examination–The Gwageo. Cool if you want to see people in costume writing on a stone floor. About as exciting as watching the SATs.

What IS cool about Gyeonghuigung is its forgottenness. No one goes there, especially at night. Don’t have a raucous party, but a few times I’ve sat on the steps with friends and enjoyed a few beers with a nice view of N Seoul Tower. It’s the only palace unlit at night and an eerie pocket of peace.

There are a lot of websites with more details than this. Detail is not the purpose of this post. Your time is precious. If you do want to know more, The Dark Side of Seoul Tour talks a great deal about these palaces, and you get to see the outsides of three of the five. It’s a good way to get intimate with this ancient modern city. You can sign up here.

For the serious history buffs, David Mason is the man to go to. You can hire him to be your personal tour guide. He’d also say that most of what I posted here was crap.